The Word "Issue" In a Will

Lawyers perform many tasks throughout the course of a workday, and the role of translator happens quite often.  By translator I mean taking legalese and converting it into plain English.  Of the legal terms I translate on a weekly basis is the word "issue".

Within the context of estate planning and probate (wills, powers of attorney, trusts) the word issue means a person's children and or offspring.  Here's an example:  Mary Lou is 92 and has a daughter, Sharon who is 70.  Sharon has a daughter Melinda age 40.  Finally, Melinda has a daughter Maeve, who is 3.  Mary Lou's issue are: Sharon, Melinda and Maeve.  Note, issue is not just children, but all offspring by birth or adoption, step-relations are not included.

Recently I explained this term to a client as we reviewed the couple's estate plan.  It was a blended family; he had children from a previous marriage, she had no children.  Wondering why his will referred to "issue" I explained the concept.  Issue referred to his children and any future grandchildren.  To which she laughed and said "well, I may have issues, but I don't have issue!"  I laughed too, and knew she had mastered the concept. 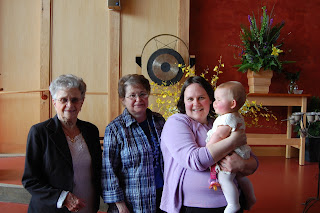 The author, Melinda, along with Mary Lou, Sharon, and Maeve.  Taken in 2011, it's four generations of women from the Lamb Family

Thanks for reading, and note that a blog post is not a substitute for an attorney nor should it be taken for legal advice.

How to Hire an Attorney When It's Time for a Will 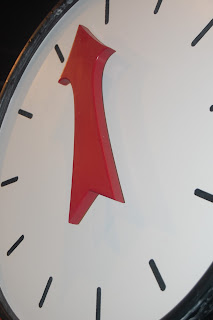 Creating an estate plan does not require working with a professional who wears a pin striped suit and sits behind a mahogany desk with an expensive view of the city skyscape. Yes, a visit to a lawyers office may be needed, or maybe not, but keep in mind there are attorneys who shun the suits and fancy trappings as much as you do. My tips for finding a quality yet down-to-earth attorney include:
Posted by Melinda Gustafson Gervasi at 9:56 AM No comments:

Pets in the Estate Planing Process 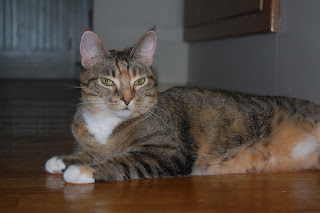 At 5 years old, Kiki the Cat was loving life.  The focus of her human companion's attention, they shared a lovely condo in downtown Madison.  Filled with sun, toys, and napping baskets, life was good.  And then life happened.  Suddenly her human companion was sick, really sick.  So sick that long-term care was needed, life in the condo became something of the past.  Kiki needed a new home, and a new family.

Not unlike countless other animals, her path may have led to a shelter.  Instead, the promise of a family friend to that human companion secured Kiki a new home.  And that home is mine.  She is now one of three cats in a home, has 5 and 3 year old humans scampering about, and a bay window overlooking a lush green yard...filled with birds.  Kiki's story turned out well.  If you are a pet owner, what would happen if you suddenly fell ill and could not provide care, or if you passed?  Unpleasant question -- sure, but an essential one.

When counseling clients in my legal practice, I routinely offer the following suggestions:

Thanks for reading, and remember -- a blog post is not legal advice.  It is a venue to stir thoughts and questions.  Please consult an attorney in your area for advice specific to your situation.

Posted by Melinda Gustafson Gervasi at 8:30 AM No comments: