Within the legal community there is a decent amount of discussion about whether or not our professional lives will be usurped by on-line and digital platforms.  Days like today reassure me that my professional life has a few good years, decades even, before a software engineer codes me out of business.

Take life insurance and children for instance.  New client call comes in.  Brief biographical information is provided related to: marital status, children, and financial instruments.  In short, caller is single with a minor child and his best friend from college is named as beneficiary of the life insurance because friend is a responsible adult who will do the right thing.  An actual attorney will likely hear this and say, "wait, tell me that again please" as her eyebrows rise higher on her forehead.  In contrast, your standard online will-writer will prompt "check here if you have named a beneficiary on your life insurance.".

In my humble opinion, when you name a beneficiary who is not the person benefiting from the money you are making a big mistake.  Big.  Huge!  Why?  That money goes to that person, no strings attached.  And sure, most of the time that person is trusted and will do the "right thing".  However, if they give too much money to person the money was really meant for, they make get slapped with the federal gift tax.  Moreover, what if trusted friend goes through a divorce, dies, or gets sued?  That life insurance money, meant for someone else, will be caught up in the friend's mess.

This is the perfect example of why a lawyer still provides greater benefit than an online system.   When something does sound right, we'll raise our ears up and dig into the details making sure a huge mistake has not or will not occur. We can work around that pit of a mess and provide far more uniquely crafted documents.

Thanks for reading, and always, remember a blog is meant to spark discussion and should not be taken as legal advice.  Moreover, we have 50 different states, each with its own set of estate planning and probate laws.  Always seek the advice of a licensed attorney in your home state, not a blog.
Posted by Melinda Gustafson Gervasi at 12:01 PM No comments:


From Hollywood to Netflix to TV dramas, legal thrillers remain a popular film genre.  Recently I enjoyed watching The Grand Budapest Hotel, a Wes Craven film.  Set in a fictional remote mountain village somewhere near the borders of Germany, Switzerland, and France, it is a quirky film revolving around the owner succession of a grand hotel. There is the requisite scene for a legal drama: " the reading of the will".  From the deceased's children to her cousins thrice-removed, all assemble in a dark cavernous room, dressed in black, with an attorney at the center of attention.  Here the legal misconceptions leap off the screen:

Except in limited circumstances, the attorney who drafts a will is not the Executor (or what Wisconsin law calls the Personal Representative) of the will;
The will in the movie is a massive heap of papers, of which the lawyer verbally summarizes in a sentence.  Here in Wisconsin a copy of the will is delivered to the Interested Parties (those named in the will, the deceased's next of kin even if not named in the will, and any named nonprofits).  Gathering a cast of characters in a large room where the will is read to them is dramatic but not realistic.
A third scene shows the person who inherited a valuable painting under the will dictating to his assistant a will, under which the assistant will be the sole heir.  In my opinion a will written by the assistant, who is inheriting, is not a wise move.
The movie did contain some accurate points.  First, an amendment to a will is called a codicil.  Second, the attorney for the estate represents the estate. The the attorney does not represent the interests of any interested parties.  That would be a conflict of interest.

This was a fun movie. Just do not take screen plays to be legal advice or education.  If you have any legal thriller books or films with estate planning or probate issues you would like me to comment on in future newsletters, please send me a message!

Posted by Melinda Gustafson Gervasi at 9:00 AM No comments:

As Summer 2019 begins its slide towards September our family strives to complete our annual License Plate Game.   It's a great way to reinforce the fact the United States is made up of 50 different states (for our elementary aged kids), all with different plates.....and sets of laws about estate planning & probate.

Unlike federal law, such as immigration, which is the same from Maine to California, estate planning and probate laws are written at the State level.  Leaving us with 50 different sets of laws about who is in charge and where things go upon your death, as well as next of kin's ability (or lack of) to make medical and financial decisions if you are alive, but too ill to act.

Keep this in mind when you are reading materials for a national audience.  For example, mass produced materials about estate planning claim the fee for a court to oversee the transfer of probate assets (those assets that do not have a designation or label on them about where it goes when you die) is 6, 8 even 10%.  While that may be true in some states, it is not true in all states.  Wisconsin has a fee of 0.2%, no where near the fees in other states in the country.

It is also helpful to keep the concept of 50 different states in mind when talking with family and friends who live outside of your home state.  Terms and powers can very, especially in the are of powers of attorney.  You'll find "executor" in one state, and "personal representative" in another.  Both perform the same basic job function.

Please remember that a blog stimulates thoughts and ideas, but is not legal advice.  Please seek counsel from an attorney licensed in your home state.  And may you all experience the trill of finding a Hawaiian plate outside a Wal-Mart in Dodgeville, Wisconsin when you stopped to pick up a fishing license before enjoying Gov. Dodge State Park's summer activities. Thank you for reading. 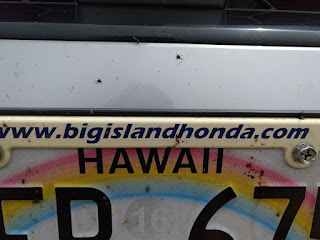 Posted by Melinda Gustafson Gervasi at 9:13 AM No comments: