What I've Been Reading: The Diving Bell and the Butterfly 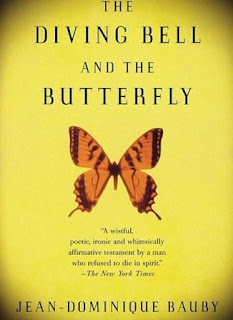 Based on the recommendation of a client, I recently read an awe inspiring memoir.  The Diving Bell and the Butterfly was written by Jean-Dominique Bauby.  In his early 40s' Bauby, then editor of the French Elle Magazine, suffered a massive stroke.  Following, his only means of communication was to blink his left eye.  While his mind raced on, his body did not respond.  The words in his memoir are poetic, but the method in which it was written is amazing.

Through a series of blinks, and an alphabet arranged by the frequency of a letters use, he dictated the memoir over the course of the summer of 1996 with the assistance of a therapist, Claude.  He blinked when he got to the letter he needed.  She transcribed.

Letter by letter, word by word, sentence by sentence, Bauby created his memoir.  Suffering from "locked-in syndrome", he takes the reader on an amazing flight of his thoughts, emotions and memories.  The passage describing father's day at the beach with his children and his inability to ruffle his son's hair was one of the most vivid and gripping paragraphs I've ever read.

At just over 200 pages, the chapters are short yet pull the reader in.  No matter the time on the clock, you want to keep reading.  Easily read in one sitting, this is an amazing piece of literature.  It has also been turned into a movie (french), which I will be viewing at some point in the future.

Locked-in syndrome, while quite rare, raises concerns for many clients when they are creating powers of attorney for health care.  If my mind is still there, I want to be kept alive -- that is there general opinion.  After reading Bauby's memoir, it is evident that life after a massive illness can be amazing, but also terribly painful.  It was advances in medical technology that saved his life following the stroke.  Sadly, he died just two days after the book was published in France.

Whether your interest is memoirs, medical ethics, French life, and matters of the heart -- you will find this an enjoyable and moving book to read.