In my efforts to bring new and informative information to my Illness, Death and Taxes for the Middle Class readers, I have a Google Alert set up for the terms "wills".  And as a result, I receive a lot of updates about Prince William (commonly called Wills) and the Duchess of Cornwall (formerly Kate Middleton).  And finally I have a blog post that mentions the royal couple! 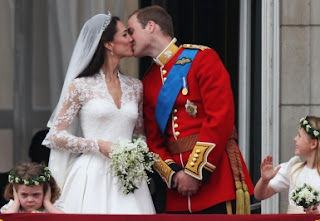 Yes, I will admit, I was one of the millions who watched the wedding live on TV.  When I saw a headline about a piece of the royal wedding cake going up for auction, I assumed that the story would say the proceeds would go to a worthy charity.  However, that does not appear to be the case.  The item was submitted anonymously and is expected to fetch 1,000 pounds.  Also included in the auction are pieces of cake from Prince Charles and Lady Diana's wedding as well as the wedding of Princess Anne.  The auction will run from May 3rd to May 24th at www.pfcauctions.com.

Just because a charity is not mentioned, does not mean a charitable organization won't benefit.  I certainly hope one does.  What a lovely way to raise funds.

How about you?  Have you ever considered donating an item to a charitable auction?  I routinely donate certificates for 1/2 off estate planning services (for those 18 and older who live in Wisconsin) to local non-profits.
Posted by Melinda Gustafson Gervasi at 5:00 AM