It appears that yet another case is filtering its way to the USSC with another challenge to the Defense of Marriage Act.  Why?  In this case a lesbian widow (married in 2007 to her partner under Canadian law, and later recognized under New York law) had to pay over $300,000 in estate taxes when her partner died.  Yes, the partner named her as the heir, but since it was a marriage the federal government does not recognize, federal tax was owed.

Lawyers have a natural understand of how laws conflict.  There is local law, state law, federal law, laws of other countries.  Here, in order to avoid the federal estate tax, couples need to be married.  Partnered (same sex or not) doesn't cut it.  Taxes are owed.  The same fact pattern, with one simple change, the deceased was a male (from which the federal government would have recognized the marriage) no tax would have been owed.

I'll be watching next Spring when the court begin issuing opinions.  My law school days were long ago, but my memory tells me that issues of marriage were traditionally set at the local level.  Will the court uphold DOMA or find it unconstitutional?  Time will tell. 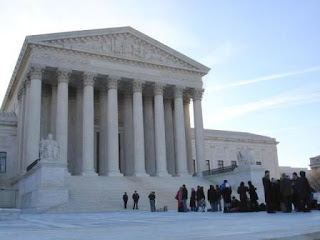