When a Lawyer Goes Sledding....

January in Wisconsin translates to many things: snow plows, Packer Play-off hopes, golf courses transformed into cross-country ski wonderlands, and kids zooming down hills on sleds.  Of course, three of the four depend on there being lots of snow on the ground (okay, maybe the Packers' Play-off hopes depend on that too).  So when this past weekend we saw the forecast for the week ahead calling for temperatures in the low 40's combined with rain, we knew that Sunday must be a day for sledding.  We had not managed to get the kids out yet this year, and the hill would likely be turned into a expanse of slush and mud with the warm up.

Mission accomplished.  Adorable in their snow suits, hats, mittens and boots, our children squealed with delight as they zoomed down an icy hill into a field of fluffy flying snow.  "Again!" they shouted.  For a good hour we drudged up the hill, and then shot down like a rocket.  We were not alone on the hill, many families with young children joined us in this quintessential Midwestern winter fun.  Laughter rang in the air, but there were the occasional tears and shouts of "watch-out!".  And then there was me, a mother lawyer.

Mothers seem to have an innate ability to sense danger when it comes to our children.  Combine that with a lawyers training to foresee perils, and you can have a rather damp personality on a fun outing.  I did my best to keep my concerns at bay, but they bubbled up when I saw two children, around ages 8 and 6, barreling towards my 4 year old who sat on the sidelines, resting while waiting for us.  Thankfully another parent was close by, and hovered over my son, and pointed for the kids to steer away.  From this I offer several lessons for a happy afternoon on the sledding hill: 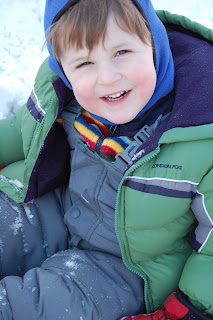